The below post is from a GoFundMe following a tragic collision.  Its speaks for itself.  The ‘care’ was so ‘enhanced’ that the grieving parents had to turn to the good will of the internet to help them in their darkest hours.   This is ICBC’s enhanced care.

When British Columbians learn what rights the government took from them and replaced with substandard benefits many are rightfully disguised.

Crashes will keep happening.  British Columbians will keep learning the truth one crash at at time.  If you find it cruel and unfair to have rights taken from crash victims such as pedestrians, cyclists, children and grieving parents all so negligent motorists can pay less for insurance speak up.  If not nothing will change.   And people will keep learning these ugly truths when its too late to do anything about it. 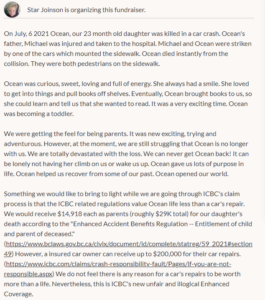