Written by ERIK MAGRAKEN on January 16, 2023. Posted in Uncategorized. 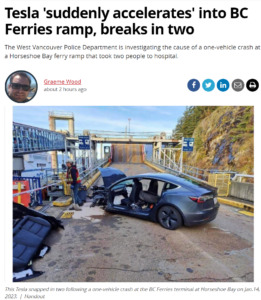 This week it was reported that a Tesla “suddenly accelerates’ into BC Ferries ramp, breaks in two.

Despite the charged headline the body of the article makes it clear that the cause of the crash is unknown with police investigating whether “either a mechanical issue, or a matter concerning the driver, which may have caused the sudden acceleration.”.

For the sake of a teachable moment under current BC law let’s assume the former.

The law has carved few exceptions to this harsh reality.  One of the rare exceptions is if a vehicle manufacturer or mechanic negligently created a mechanical defect.  If something like that can be proven then crash victims have limited rights to sue to recover non pecuniary damages.

The limited list of exceptions in part reads as follows:

(a)a vehicle manufacturer, respecting its business activities and role as a manufacturer;

(b)a person who is in the business of selling vehicles, respecting the person’s business activities and role as a seller;

(e)a licensee within the meaning of the Liquor Control and Licensing Act whose licence authorizes a patron to consume liquor in the service area under the licence, respecting the licensee’s role as a licensee in the sale or service of liquor to a patron;

(f)a person whose use or operation of a vehicle

(ii)results in the person’s conviction of a prescribed Criminal Code offence;

(g)a person in a prescribed class of persons.

See the theme?  So long as ICBC is not on the hook for the payout they are ok with you having the right to sue.