Settlement Remorse Not Enough To Have ICBC Contract Set Aside

Written by ERIK MAGRAKEN on August 26, 2021. Posted in Uncategorized.

In a recent decision of the BC Civil Resolution Tribunal and ICBC settlement was upheld despite the injuries proving worse than the Applicant had expected at the time of reaching a deal.

In the recent case (Vaidyanathan v. Kaye) the Applicant was injured in a crash caused by the Respondent.  The Applicant accepted an ICBC settlement for the minor injury cap of $5,500 (a cap that is being judicially challenged as being in violation of the Canadian Charter of Rights and Freedoms whose fate is yet to be decided).

Following settlement the Applicant was displeased with the deal finding the injuries were more compromising than anticipated.  He sued for damages.  In dismissing the claim as already settled the Tribunal provided the following reasons which serve as a good reminder that it is sensible to obtain legal advice before agreeing to an ICBC settlement to assist with making an informed decision:

Written by ERIK MAGRAKEN on August 17, 2021. Posted in Uncategorized.

Remember when the BC Government and ICBC said they were a dumpster fire?  Said your rights had to be taken away (they called taking your rights away “enhanced care”) in order to avoid financial calamity?  Turns out it was all a lie.

In the fiscal year ending March 31, 2021 (a month before the no fault system even came into force) ICBC did not lose millions as the government claimed they were going to.  They made over 1.5 billion.

And now they’ve stripped your rights.  As this grieving family learned.  And this British Columbian.  And countless others.

The government told you there was a crisis.  That your rights had to be stripped to avoid it.   Turns out that was not true.  But they got what they wanted.

If you are struck by a careless motorist now you don’t have any rights against them.  But ICBC has billions.

We Are Hiring, Grow With Us!

Written by ERIK MAGRAKEN on August 16, 2021. Posted in Uncategorized. 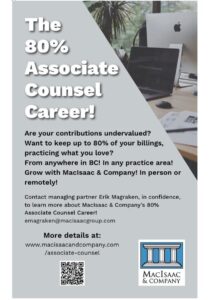 MacIsaac & Company is proud to announce our “80% Associate Counsel Career!”.

One of the most generous pay structures in the legal industry!

We are flipping the owner/employee model on its head.  If you are interested in a career where you can practice what you want, from where you want, without billable targets and the ability to keep up to 80% of your billings check us out!

A model giving you the best of both worlds between solo practice and employment with one of BC’s longest established firms.

If you are thinking of branching out on your own give us a look first.  You’ll like what you see!

When Can British Columbians Still Sue After A Vehicle Collision?

Written by ERIK MAGRAKEN on August 11, 2021. Posted in Uncategorized.

As readers of this site know the BC government stripped victims’ rights to sue careless and even reckless drivers for almost all crashes after May 1, 2021.

The law taking these rights away is short and to the point.  Section 115 of the Insurance (Vehicle) Act reads as follows:

Despite any other law or enactment but subject to this Part,

(a)a person has no right of action and must not commence or maintain proceedings respecting bodily injury caused by a vehicle arising out of an accident, and

(b)no action or proceeding may be commenced or maintained respecting bodily injury caused by a vehicle arising out of an accident.

The law carves out some exceptions and these are worth being familiar with if you are the victim of a collision.